JUNE SALMON was a respected, admired and much loved member of the Dame Allan’s family for more than 30 years. She made a huge contribution to the Schools during her lifetime, giving her knowledge, time and energy generously.

From the moment her children joined in the late 80s, she immersed herself in school life, becoming an active member of the Parents’ Association. The former home economics teacher, who was from Low Fell and had worked at schools in Gateshead and Cramlington, as well as in Twickenham at the former Thames Valley Grammar School, was soon asked to join the governing body, where she was to make her mark for over a decade.

One of the highlights of June’s years at Dame Allan’s was meeting the Queen in 2005, when the Monarch visited the Schools to officially open the new Sixth Form Centre, the Queen’s Building. The Schools have a ‘June Salmon Prize’ for good citizenship, awarded this year to Year 12 pupil Anna Sudlow.

June’s empathy and people skills made her well liked and equally appreciated by the Schools community. Head of Economics Colin McFall, who taught June’s son Jonathan and was Rachel’s tutor, recalls: “June was the Schools’ first link governor for staff,which is testament to her innate ability to connect with people. She was well respected by staff and governors alike.”

Jonathan, who left Dame Allan’s in 1995 and was Chair of the Allanian Society in 2006, says: “Mum was so honoured to be such a big part of the Schools. She built a natural rapport with people and would spend hours in the staffroom gaining and giving support.

Pastoral care was very important to June; she was a strong believer in an “all-rounded education” offering the pupils support for all their needs beyond the academic. It was something she valued in her own children’s education, and she wanted every child to have access to the pastoral support they needed.

Her son Jonathan explains: “Mum was an advocate for the underdog. She wanted to help make sure that pupils who were struggling with academics or their mental health had their needs met.”

Rachel and Jonathan attended the Schools in the infancy of the Diamond Structure, when a mixed Sixth Form was created and a mixed Junior School reintroduced. Both were on part-funded places and made the most of their years here. They were both heavily involved in the choir, while Jonathan played cricket and rugby, and Rachel was Head Girl in 1992-3.

She says: “Moving us to Dame Allan’s was the best decision my parents made; it was the making of us as individuals. I wouldn’t be the person I am today had it not been for the rounded education I was given. It’s more than just the academic grades, it’s the development of the person and I think that has genuinely been what Dame Allan’s is about.”

Jonathan, who now lives in the USA and works as a director of a camp for adults and children with disabilities, agrees his school experience has shaped him: “It’s the idea of family, togetherness and supporting people, regardless of what they need. That mattered to mum and it’s the very reason she wanted to give something back to Dame Allan’s; at the end, giving back became her raison d’être.”

While the School community valued June’s dedication over the years, Rachel insists that “She got every bit as much out of it as she put in. She massively enjoyed it. Until her dying day, Dame Allan’s was so important to her, and I think that stemmed from gratitude for the education we had.”

June last visited the Schools in 2017 and passed away in July 2018. In her will, she bequeathed a generous amount to both her local church and Dame Allan’s Schools. The money has been used towards the creation of The Snug, a dedicated wellbeing centre that houses support services operating outside the curriculum, including psychotherapy,counselling, learning support and special educational needs, as well as the therapy dog, Heidi.

“It’s a very fitting lasting legacy,” says Jonathan, “Supporting people was at the heart of everything our mum did, and it’s comforting to know she’s helped enable a big step-change in pastoral care at Dame Allan’s. It goes back to that idea of the all-rounded pupil. Having that extra support is not necessarily an academic part of the school, but it’s what makes Dame Allan’s, Dame Allan’s. And I think that’s great.”

Rachel agrees: “The money she bequeathed was given in gratitude for what Dame Allan’s did for our whole family over time. The school gave us all so much - it made us the people we are today, it developed lifelong friendships, and it gave mum something to be so proud of. When The Snug was suggested as a way to use her legacy we jumped on it, it couldn’t have been more perfect.”

Designed as a positive place in the heart of the Senior Schools, The Snug includes a counselling area, chaplain’s room and an SEN office, as well as a soft seating area to give pupils space away from the classrooms.It’s an environment where young people feel safe, heard and understood.

Will Scott, Dame Allan’s Schools Principal, says that June’s legacy has made a huge impact on the Schools.

“At Dame Allan’s, pastoral care has always been integral to our ethos. We understand that a pupil’s whole school experience is what shapes an outstanding education and in these times, it’s so important to ensure young people’s mental health and wellbeing needs are met. The Snug allows us to offer an extra level of individual support to our pupils and it is well used every day.

Taking a seat in The Snug, Rachel feels her mum would approve. “She would be delighted.” 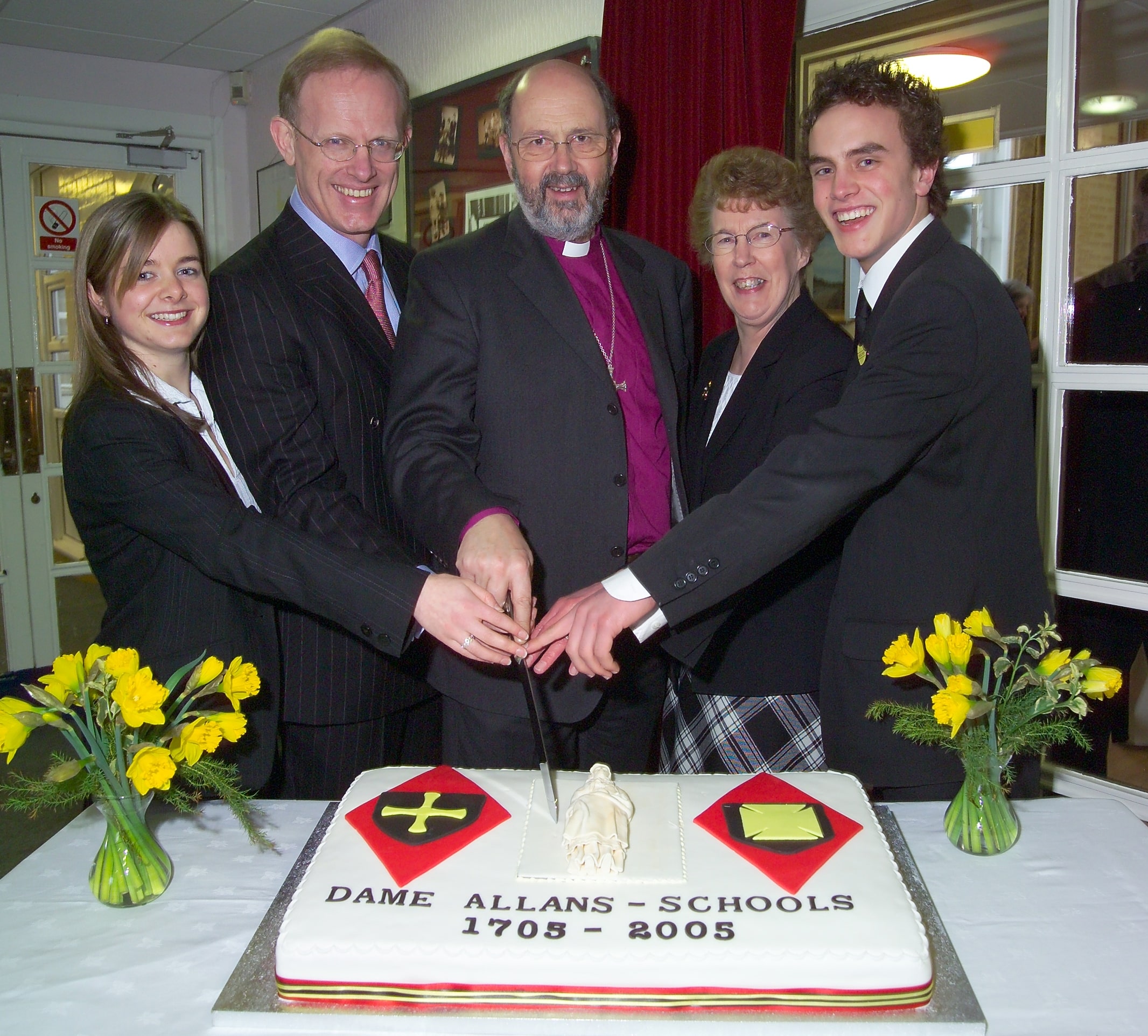 June Salmon pictured in 2005 at the Tercentenary celebrations with then Principal, Dr Hind, then Bishop of Durham, Tom Wright, and Dame Allan's Sixth Formers.